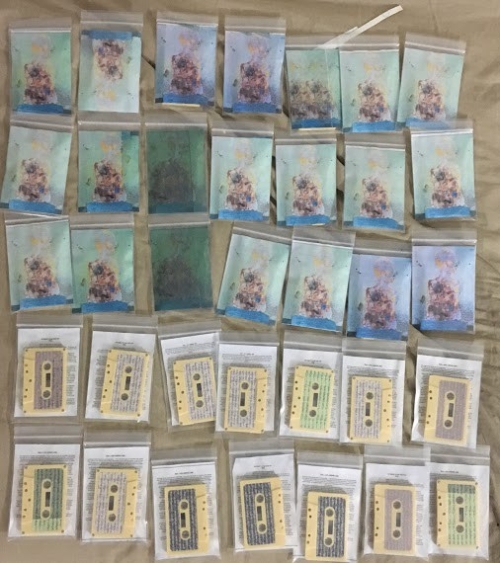 Euu – con- cephalo- enti-
Malcomponents of past forced interjecting. I was sick of my synth for sometime and couldnt deal with the vast remake and inevitable alternation of every full repatching …to just turning it off and back on. (Im sure many full on synthaholics can comprehend what the fuck I mean by that) its comprehendible, at least to me. Regardless im back to using so as a main basis anyway.

Much of my soundwork is an expression of my interior and my exterior interaction. This release is near an idea of composition of memory, where nothing is the same as an origination of, or first sight, first action, first experience of… and then our need for reinterpretation, our partial memory and complexity even through simplification of so. Imagine if we remembered 100 % of everything we had ever interfered, interacted, interjected, recognized through any perspective… would that perspective even have alternations of interiorized evaluation or just saw as natural background, or would there never be an actualized background of perspective?

I know for my time of life and realization of alternations inevitable, most past will disintegrate and develop a masked noise between its definitions for me. It variates. Of course as I bring up with a majority of my work and my recognition of life what has fallen inevitable is the increased epilepsy and inevitable failure of surgery which had taken years from my life, destructed much of my comprehension and has taken me to a point of child meets adult meets senior all symmetrically attempting to fall in synchronization. This is nearer and nearer to a transmigration yet through a still living body.

And all reflecting this release, this is a complexity of previous recordings wether released or not in attempt to recognize into one structure. I don’t want to call it a ‘mixtape’ as for all are previous recordings are mine, probably 95% unreleased and rejected, yet in a needed recognition and curiosity of. The majority I had nearly no memory of, even if the cassette extracted form had a date on so.

This all comes to a further yet inevitable ground of my realization (especially from being told so from many doctors, post-multiple surgeries and consistent degrading situance i’ve fallen into; I’m inevitably coming into dementia at a higher rate than the average living human. Being told so over and over, is more forcing, complexing and degrading for my own analysis of myself. Ive come to a point wether I die early or past 100 years form now I can comprehend, yet most likely will not be capable to comprehend consisting reality and interaction.